Note: This article was first published on 15th August 2017. I've republished it here, followed by a brief update.

On 21st August, 2017, across a narrow band of land from Oregon to South Carolina, the summer will briefly be interrupted. The sky will dramatically darken, revealing bright stars and planets, the temperature will drop and any summer breeze will die away. Even birds and insects will fall silent. This will be the first total solar eclipse in the contiguous United States since 1979; the next two after this will be in 2024 and 2045.

Most of us have seen a lunar eclipse, when the Moon is obscured by Earth's shadow. A solar eclipse is very different; much rarer and far more spectacular. In this case, it is the Sun that is obscured by the Moon.

As you probably know, the Moon orbits the Earth roughly once per month. It is this orbit that gives the moon its phases, which depend upon the proportion of the sunlit Moon we on Earth can see. When the Moon is at that point in its orbit where it is between the Sun and Earth, its daylit side is facing completely away from Earth, and thus the Moon looks completely dark. However, the Moon's orbit isn't completely aligned on the plane between the Sun and Earth, so at most New Moons, the Moon is a few degrees above or below the Sun in the sky, and we cannot see it.

Very occasionally, however, the Moon is more closely aligned with the Sun and Earth, and we see this as an eclipse. If the alignment is not perfect we see a partial solar eclipse, during which the Moon gives the impression of taking a 'bite' out of the Sun's disk, from right to left. The bite increases until the point of maximum eclipse, after which it diminishes until the Moon has cleared the Sun's disk (the Moon won't be seen again until a couple of days later, when it will appear in the early evening sky as a thin crescent). During a partial solar eclipse, such as this one seen in Norway, the Moon, in its orbit around Earth, crosses above or below the centerline of the Sun, covering only a fraction of the Sun's disk.

If the alignment is perfect, though, then we see a total solar eclipse, and the Moon's bite of the Sun will extend until the Sun is completely covered by the lunar disk. As you might expect, this is much rarer than a partial eclipse. Lunar eclipses are common, because the Earth is much larger than the Moon and so casts a much bigger shadow, which extends almost four times further away than the Moon, and has a diameter over 2.5 times that of the Moon at the distance of the Moon. This means that a lunar eclipse can be seen from anywhere on Earth where the Full Moon is above the horizon (i.e., anywhere where it's night). A solar eclipse, in contrast, relies on the Moon's far smaller shadow, which only just reaches the surface of Earth and can be no more than about 250 km (150 miles) across.

In a fortuitous cosmic coincidence, the Moon is about 400 times smaller than the Sun, but is 400 times closer to us. That is why the Moon's disk is just able to cover the Sun's, and only when the three bodies' alignments are perfect. If the Moon was much larger and/or closer than it is, total solar eclipses would be far more common, while if it was smaller and/or further away, they would be impossible.1

In fact, the Moon does not orbit Earth in a circle, but rather an ellipse, meaning that its distance from Earth varies by about 14% from its closest monthly approach to its furthest. If its furthest distance coincides with a solar eclipse, then even during mid-totality the Moon's disk will not be large enough to cover the Sun's disk (the cone of the Moon's shadow will not reach the surface of the Earth). This is called an annular (latin: annulus, ring) eclipse.2 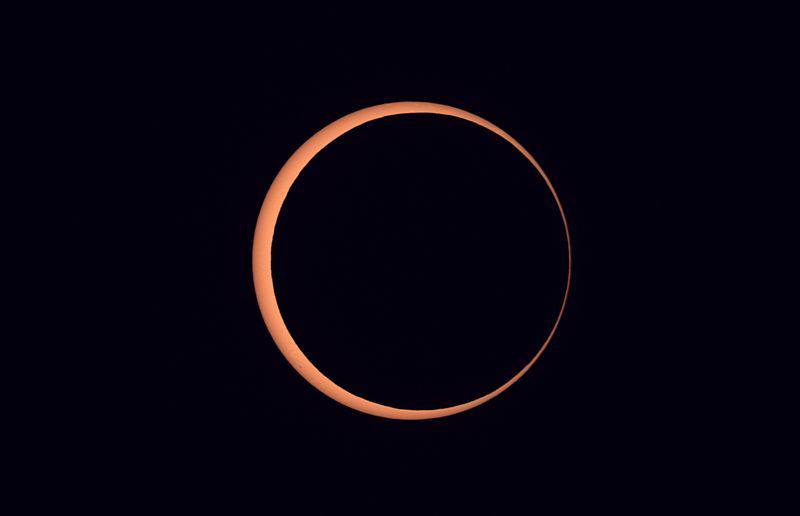 An annular eclipse occurs when the Moon is near its furthest point from Earth during the eclipse.

Of course, any total solar eclipse is preceded (and followed) by an ever-increasing partial eclipse, as the Moon appears to creep across the Sun's disk. During the first hour or so, not much happens, other than this slow encroachment. However, once totality nears, the effects become increasingly noticeable, extending even to surrounding wildlife. A few minutes before totality, the perceived temperature drops, and shadow bands may be seen moving across the landscape. With seconds to go, the shadow of the moon itself can be seen racing towards the observer. Daylight is swiftly replaced by twilight, revealing bright planets and stars (maybe even a comet if you're very lucky). Some flowers actually close their petals, and bats have been observed to begin their evening hunt for insects.

When true totality begins, the Sun's vast, incredibly hot outer atmosphere, otherwise invisible to human eyes, abruptly appears. This is a plasma, superheated to millions of degrees Celsius, but a trillion times less dense than the main body of the Sun. It appears still, but is actually in constant violent motion, due to the enormous amount of heat and the Sun's magnetic field. All around, the horizon shows the colours of sunset (surrounding locations that aren't in total eclipse).

As observers take in all these sights, the Moon is continuing in its path across the Sun. Soon enough, totality ends as abruptly as it began, as the Moon slides across the other side. The corona disappears, but one final spectacular effect can be observed: the diamond ring, as the first sliver of Sun emerges from behind the Moon. None of this can be seen during a partial eclipse, even at 99%.

During this month's total eclipse, a wide swath of the United States will experience at least the partial phases of the solar eclipse. It should be clear from what I've written that, if you possibly can, you should get somewhere where the eclipse is total.

Map of the August 2017 total solar eclipse. Go here for an interactive map.

For example, on the Atlantic coast, if you are in Greenville, Columbia or Charleston, SC, you'll see a total eclipse. If you're in Charlotte NC, Augusta GA or Beaufort SC, you'll have to make do with a (vastly inferior) partial eclipse, albeit at around 98-99.5%. 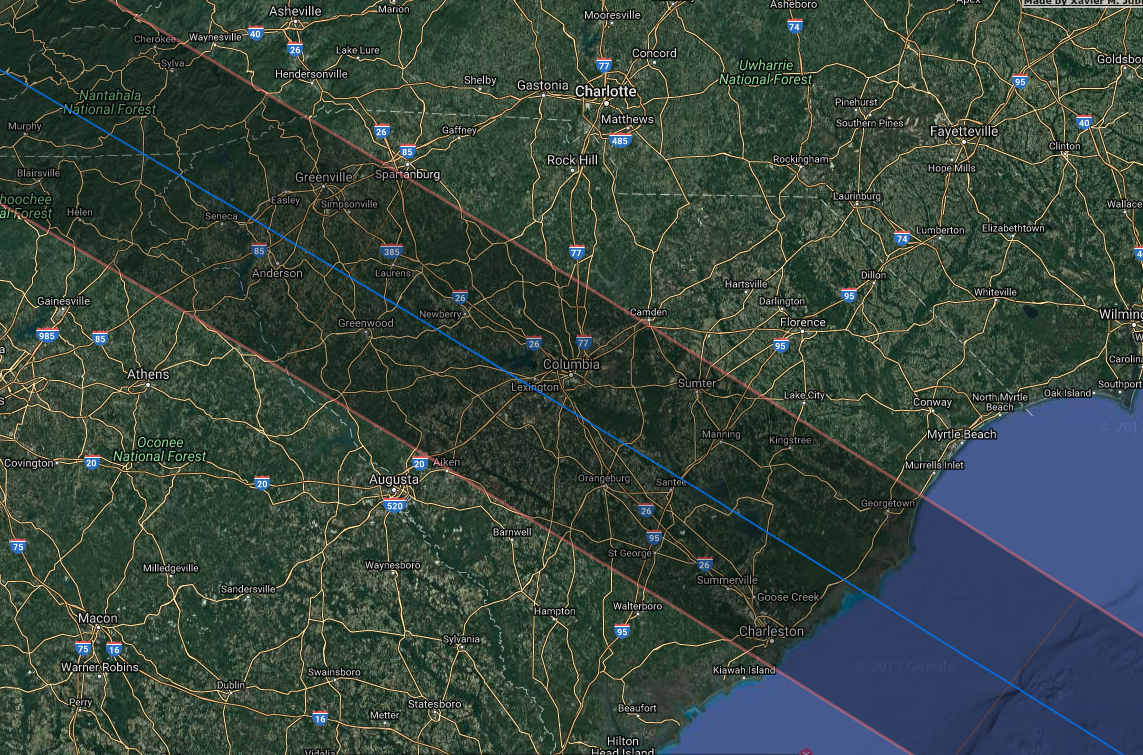 I hope you enjoy the eclipse, and here's hoping for clear skies!

I was lucky enough to see the eclipse in its' entirety, from a beautifully cloudless summer sky in Orangeburg, SC.

I spent almost the entire time actually watching it with my own eyes, but I did set up my camera on a tripod and got this series of images, taken during the last few seconds of totality: If you ever get the chance to see a solar eclipse, don't miss it!